Not all work as a "travel teacher" is work abroad. Sometimes you also have to do the less fancy parts of the job. They can be inspiring as it is to hear about our seventh graders talk about their new friends they have made contact with in Spain. It can be planning and making different kinds of reservations for activities at home or abroad.
Last week has been a holiday week in Sweden and the week before they had a similar week in Denmark. During these two weeks we have been writing our application to Nordplus  to enable more students visiting each other in both countries. We have occasionally had a lot of contact, but it is not always easy to write things together when schedules are hard to combine. Last year we had the luxury of being in the same place as we wrote our application, but this time we where connected with the help of Internet. It is not the same, but since we know each other well it all worked out. Unfortunately last year our work was in vain and we were not granted any money, but since the only reason was "lack of funds" we decides to try again. Now we hope our work pays of better this time. 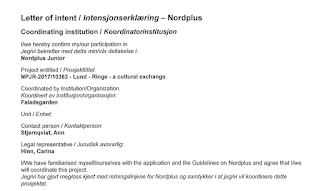 London is normally not a place I would take pupils, and specially not a whole class of ninth graders. I might be a coward, but I feel that it is a city with many temptations and also a place where you constantly need to watch out for different reasons. However it so happens that my class this semester won a science competition of inventions and the first prize was a three day trip to London. We went there last week, from the 6th to the 8th of February. 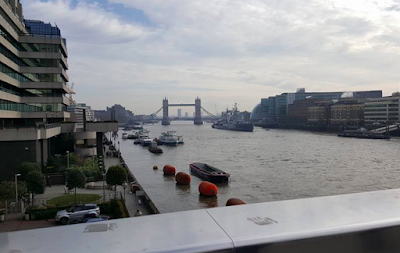 When I travel with school exchange the pupils how decide that they are bold enough to come can be a bit allike. Far from all pupils the ages I teach dare to go to another country and visit a unknown family. The ones travelling are often the ones that have travelled before and feel at ease in new situations and new people. This time, travelling with a class other challenges and possibilities appear. We had pupils in the group that were more nervous than we normally have. The arrangements surrounding a trip were somewhat new to them and as responsible teacher it was acquired to step in a bit before we normally do. With that said I am very happy having done this trip.

All the pupils behaved excellent and it was a thrill to see how they, even after three and a half years, got to know each other better because they spent so many more hours than usual together. Most of all it was a great joy to see the way many of the pupils savoured the trip, and mostly the ones that normally do not travel outside the country. It is special not only to talk about the sightings in London in English, but to tell your classmates something about them standing in front of them. It is developing to order your food in English if you normally don´t and come back with memories and a gift for your family from another country. Well back home they want to keep spending time together, and we are already planning for another, shorter, trip before the leave our school. 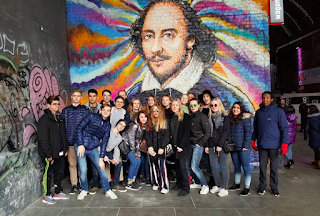 After a week in school I went on my first trip with pupils this semester, a semester that is unusually filled with trips. I went to visit our friend school in Ringe in Denmark with two colegues and 21 pupils from eighth and ninth grade. I have been in contact with Nordagerskolen for some years, and the one time I have actually visited the school before it felt like coming home. I have had a lot of contact with two teachers working there. Most of all Katja, who has also visited my school with another colegue of hers. We applied for a Nordplus fund that we regretfully did not get. I have also had quite a lot of contact with Mikkel, and with him and Elisa from our friend school in Zaragoza, I held a speech at SETT last year.

Me and Katja have worked some time to enable an exchange between the two schools The pupils at Nordagerskolen, ages 7-9, choose amongst three different profiles; International, Sports and Natural Science. Katja works with the International Profile, and her pupils have been in contact with pupils of Fäladsgården for a couple of years. Last May I applied for funds from the Hedda Hylander Fond and there got money that made it possible to invite a little more than twenty pupils to a free three day trip to Denmark. The pupils stayed at Danish families and together we made a lot of activities to get to know each other and the other language and country. If you know or understand Swedish it´s possible to read much more about it in this blog.

We learnt a lot during the days in Denmark, both pupils and teachers, partly because of the differences in the groups of pupils. I don´t think any of us anticipated that the cultural differences would matter, and the differences were more about gender and city versus countryside than of nationality, but we go second thoughts about how we mix pupils that differ in age. We had a lot of fun also and many of them made really good friends during the days in Ringe, and hopefully they will come and visit us during our International Week in May! 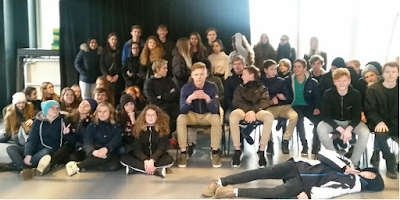 I haven´t started this blog when I should, in the beginning of the year, so these first few posts will recapture the first trips I made that have an impact on my work life.

I spent four years of my childhood, the ones between six and ten, in Chile as my father is an astronomer. I attended a school that was the fairly new, a school founded by two American astronomer families and one Chilean family in 1976. If you are interested in the history of the school, you can read more about it here. We came to la Serena in 1979, and then the school was still quite small. This New Years´I travelled to Chile with my husband, my mother and my children to show them where I grew up. We spent time in the capital, Santiago, but we also visited my old hometown La Serena. I had booked an appointment there with my former two teachers. One is now the head master and the other one is in charge of the younger pupils, the ones from 3 - 5. 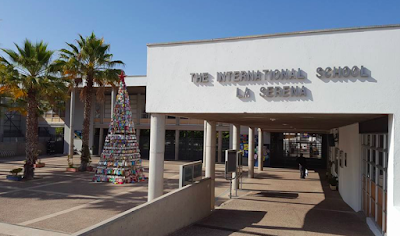 Since my times at school it has grown a lot and has changed locations twice, and I´m proud to say that I have seen all three schools. When I got there they had there long combined summer/Christmas vacations and the school had no pupils running around. It would have been nice to talk to the pupils, of course, but it was also nice to visit a school at a calm moment. We talked for hours about similarities and differences between school then and now, and also compared life as a teacher and a pupil in Chile and Sweden. It was fantastic and inspiring to be there as a teacher who now works a lot with globalization issues to be back in the school where my interest for the world and different languages started. I felt very welcome and it was very nice for all of us to remember the way the school had started, the ideas that were, and still are important, and to feel proud about the way the school has developed.

The International school now has pupils from 3-18 and the spoken language at school is, and always has been, English. Only Castellano, or Spanish, and Chilean History are given in Spanish. The teachers are very engaged in there pupils and the school has a list of pupils that want to go there, but that they don´t have room for. This despite the fact that it in no way is cheap to attend to the school.

Even if we spoke a lot of memories, mostly we talked about possibilities for cooperation. Our school has quite some experience in working with schools in other countries, and we came up with a lot of ideas together. It is a huge benefit that all classrooms have Smartboards, and it will be easy to start simple with some Mystery Skypes in the classrooms.

I went from school filled with new ideas and have great hope that we will collaborate in many ways in the nearby future!